Towards the last decade of the 20th century, it became apparent that a synergy of individual practitioner’s technical knowledge, experience and purpose had to be forged to confront the emerging complexity of dealing with swine disease problems. At this time a “mystery disease” was sweeping through the swine herds of North America, Europe and Asia.

The need to keep abreast with new technical information and advances in swine disease control and herd productivity pushed a group of “elder practitioners” to form a “college”, where they can pursue a postgraduate continuing education program through sharing of local and foreign experiences.

Headed by the most active and ubiquitous elder, Dr. Geronimo de la Cerna, together a total of nineteen practitioners signed their commitment as Charter Fellows on January 24, 1991 and the Philippine College of Swine Practitioners was established.

The founders of PCSP were veterinarians had at least 20 years of swine practice and saw the need for a more intense focus on swine medicine and management in order to serve a changing and expanding pig industry.

The PCSP’s initial objectives were to elevate the standards of swine practice, the creation of continuing education programs for its members and the promotion of the relationship between swine practice, the pig industry and the interest of the consuming public. Its maiden activity was a seminar on the then “Mystery Disease of Pigs” (now known as Porcine Reproductive and Respiratory Syndrome or PRRS) at the Manila Peninsula Hotel on April 18, 1991 with a noted Belgian virologist, Dr. Maurice Pensaert as guest speaker.

The conferment and oath taking ceremonies of the first set of officers of the association was held at the Westin Philippine Plaza on August 29, 1991. Inducted by then Secretary of Agriculture Senen Bacani were :

Also appointed to the Specialty Board in Swine Practice were:

The members making up the rest of the charter fellows inducted were:

The following year, PCSP President Ramos appointed Dr. Lapus as the association’s Executive Secretary and established its first office along Visayas Avenue in Quezon City, a few minutes away from the Bureau of Animal Industry and the Department of Agriculture.

The organization is a network of professionals that is continually assembling and exchanging information. The members meet every last Thursday of the month where they would present for analytical discussion cases encountered in practice during the period.

The PCSP strived to develop relationships with other pork industry suppliers. The move fostered information exchange regarding the needs of the industry for pharmaceuticals, nutrition, genetics and housing, among others. To enable members to have access to the most current and comprehensive information possible, the monthly meeting was timed to make way for foreign speakers that were brought in by the different allied veterinary health and nutritional companies. Members were assisted to attend for updating at the scientific meetings and conventions. For instance, the PCSP was represented by 14 members in the 1994 International Pig Veterinary Society (IPVS) Congress in Bangkok, Thailand, 12 members in the 1996 IPVS in Bologna, Italy and 3 members in the 1998 IPVS in Birmingham, England.

In November 1994, the PCSP opened its call for memberships and a group of veterinarians with at least 10 years of practice were accepted as fellows of the college after passing all requirements that included an oral examination conducted by the Specialty Board for Swine Medicine. They were conferred and inducted into the PCSP by Dr. Eliodora Vera, then member of the Veterinary Examining Board.

After 4 years of steering its wheels, the elders were elected to advisory positions. The new boars of the block were:

The PCSP recognizes that true effectiveness for its members will be reached through knowledge in nontraditional areas of expertise like nutrition, farm engineering, waste management, hence, members who had appropriate training on such areas constantly share the same to the others.

The PCSP is unmatched in providing continuing education in the traditional areas of health and disease. It is in this context that makes PCSP members the most sought after lecturers during VPAP and PVMA conventions apart from being seminar speakers to hog raisers associations, universities and colleges throughout the country. Hands on training on swine pathology and diagnostics are also provided by PCSP members.

The PCSP also strives to provide direction for private and public research by creating awareness of the challenges and obstacles its members face in the field. In 1996, it entered into a joint effort with the Philippine Animal Health Center and the National Animal Disease Diagnostic Laboratory in the conduct of a serological survey on the presence of PRRS in the country.

The PCSP acknowledges the need to align itself with the national hog raiser groups and other related organizations to address such national issues like diseases, but also concerns with the environment, animal welfare, quality assurance and genetic improvement. In 1995, as a member of the BAI’s Task Force FMD, the members reached out on an active information campaign about the disease to many commercial farms all over the country. Drs. Baron, Calud, Lapus, Santiago, and Timbol joined a technical and producers group that made an observation and study tour of the FMD diagnostic laboratory in England and an FMD vaccine manufacturing plant in France. The following year an FMD vaccine serotype O Philippines was made available for use in the country to start the BAI’s eradication campaign of said disease. The campaign paved the way for the Philippines to be certified FMD FREE without vaccintion on a Progressive Zone Approach by the Office of International Epizootics declared (OIE) by June 2011. Subsequently, OIE declared the Philippines as a country free of FMD in 2015.

The PCSP is committed to provide leadership and vision capable of teaming with Filipino hog producers to make pork protein a choice through the next millennium – the real PINOY PORK CHALLENGE. An annual seminar series named as the Pinoy Pork Challenge (PPC), is now the flagship of the association’s continuing education campaign. The 21st PPC was held last October 3, 2017 at the Mega Tent, in Libis, Quezon City, making it one of the longest-running seminar offerings of its kind.

In 2005 and 2015, the PCSP had hosted the APVS. As a founding member, the organization has actively participated in meetings and conventions to contirbute to the swine industry in Asia.

Through the years, the PCSP has produced materials to guide farmers in their fight against swine diseases. A PRRS Primer had been prepared and distributed. In 2016, the PCSP also organized the PED Summit and came out with the PED Manual that was given to all interested swine veterinarians, academic institutions with veterinary curriculums and interested farmers.

The PCSP is the recognized collegial body for swine practitioners of the Philippine Veterinary Medical Association (PVMA) and is a proud member of the premier umbrella organization of Filipino Veterinarians. It is an integral member of the affiliate member organizations and is represented in the House of Delegates Assembly to lend its voice in issues affecting the country’s veterinary practice. It also sits in government stakeholder’s meetings and is the expert opinion on swine health.

To this day, the PCSP is the only legitimate and SEC registered talent pool of swine expertise. The organization was registered as a non-stock/non-profit entity at the Securities and Exchange Commission and a Certificate of Registration was issued on August 30, 2016 and is also now known as the Pinoy Porcine Practitioner’s Inc.

The PCSP as the leading and dynamic Filipino swine practitioners committed to deliver affordable, high quality swine practice and services that significantly will create value and enrich the lives of our farmers, business partners and pig welfare as well.

The PCSP is a group believing in a set of values and ethical standards required of a swine veterinarian. A guiding light…. A spark of dynamism…. A common bond that will strengthen the core of professional practice. 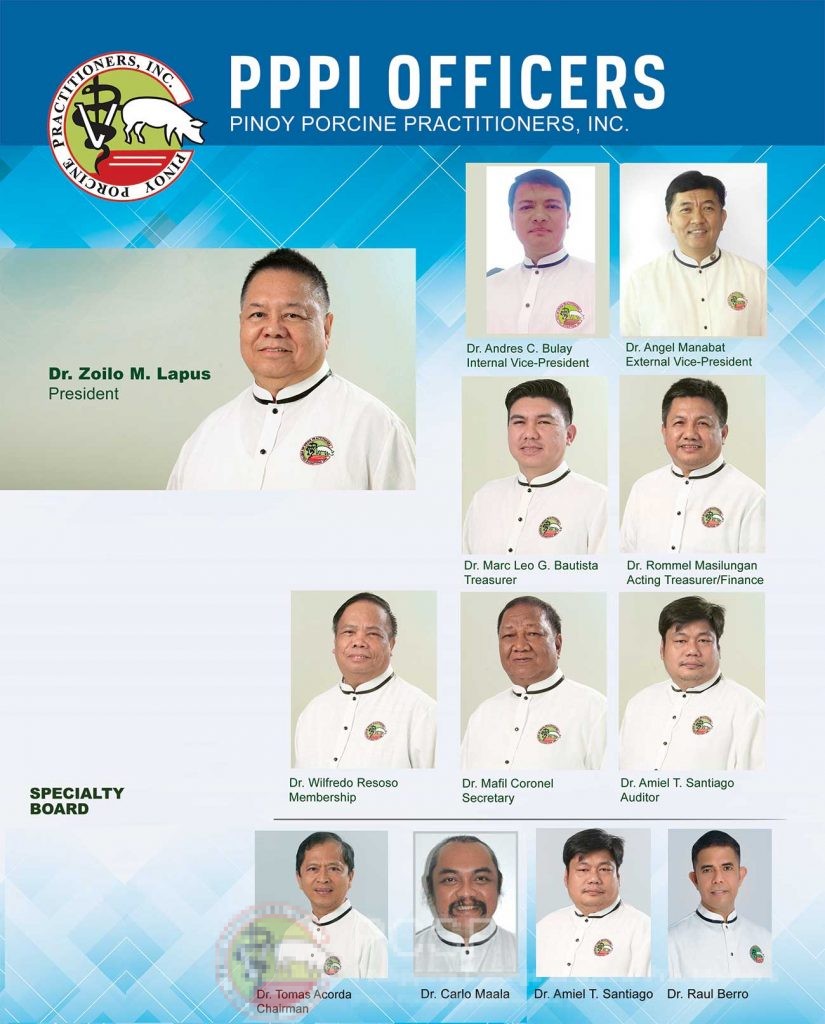